For a long time, HPS lights were the only and most effective option for indoor growing of cannabis and other indoor plants..

To generate enough light, especially during the flowering phase of most plants, you need a powerful light which covers the red spectrum of wavelengths, and HPS lights perfectly fit the bill.

But in the past decade, LED (Light Emitting Diode) technology increasingly advanced, up until a point that it might now even have surpassed HPS in terms of light intensity.

Initially, LED grow lights were nowhere on par with HPS lights in terms of light intensity and therefore were just a bad choice.

Times have changed and LED grow lights with a very high light-intensity are now available.

And the best part:

They bring some considerable advantages compared to other grow lights:

HPS or MH lamps produce very intense light and when both of them combined they provide a good enough spectrum of wavelengths for most plants.

But they also produce a lot of heat and use a lot of electricity, which pushes more and more growers away from them.

LEDs generate very little heat and therefore, it is possible to use a weaker fan or to dim the fan and bring the lamp closer to the plant tops…which in turn increases light intensity and saves on the electricity bill!

What to look for when buying a LED Grow lamp for Cannabis or other indoor type plants? 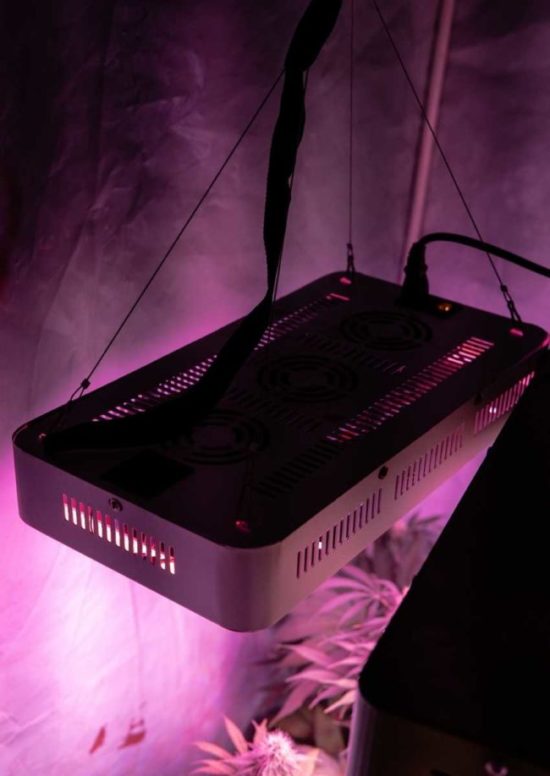 Onto the Best 5 LED Grow Lights

MarsHydro is an old and trusted player in the LED light world.

A great advantage of the Mars-Hydro is the range of models they provide. You will find a light for every type of growing space of any size.

It’s possible to replace HPS / HP lights from 250 to 800 watts with half of the wattage with a MarsHydro light. Most MarsHydro lights come with 5W LED chips. 5W chips provide light of a good intensity…as long as they come from a good manufacturer. And this light comes with Epistar chips, which are not the best but are decent!

The light’s housing is made of steel, which means that the lamp weighs a lot, but is also very stable and won’t break easily.

The optimum coverage area is dependent on what height you hang the lights. You want your lights as close as possible, without burning your plants. Here it’s important to keep the manufacturer’s recommendations in mind.

But the closer you hang them, the smaller the coverage area.

If you want to know how much you can cover with your particular light, as a general rule you can use the 50 watts per square foot rule.

It has an adjustable vegetative and flowering mode (with different spectra of light), which means you can save on electricity in the different phases of your plant’s growth.

This light doesn’t get very warm, which significantly reduces the risk of plants burning.

It’s also low-end price range, even though it has a good performance and good build quality.

This is currently the best value for money light you can get.

VIPARSPECTRA lights come in different sizes. The 900W plant lamp is the more powerful and bigger brother of the 300W lamp of the same manufacturer.

Looking at its price, it’s simply better value for your money than its smaller brother.

Now: If you’re going to grow only 1 plant, this light will be overkill and you should go for a smaller light.

Its low price will be great for anyone looking for a very cheap light, that still has a good quality.

The VIPARSPECTRA 900W light is quite compact for such a high-wattage light. Its actual power-draw of about 400 watts is reasonable, but on the low side. It operates with 180 Epistar chips each with 5W power.

It also comes with growth and flowering modes and covers a good enough spectrum. This is also reflected in the results, your plants will grow well, evenly and quickly.

It’s priced higher than the lights before, and with good reason:

It’s built with 5 watt CREE chips, which, on a ‘per-chip-basis’ are much more powerful than the chips from the lights before (Epistar chips).

Equipped with a 10-band spectrum, the lamp emits both infrared and UV light and covers almost the full PAR spectrum.

For best results, you should not try to cover more than 12 sq. ft. if you’re growing for marijuana plants. For plants needing less light-intensity, this area can be increased so that even more plants will be covered, but of course the intensity will be lower.

The light is especially recommended for beginners which want a higher quality yield, but are prepared to spend its premium price.

Its quality is close to the MarsHydro Mars Pro II.

The difference is: it’s better suited for smaller indoor grows.

The intensity and thus the penetration capacity of the Reflector series is less than of the MarsHydro II.

Plus, the Reflector series make cover more area than the MarsHydro II Series…

Which theoretically results in more yield…

But since the MarsHydro II has deeper penetration…the quality of your yield will be better with the Mars II Series.

But the most important difference with the MarsHydro II series is that the coverage area of this light is better suited for rectangle shaped spaces.

The Platinum LED P300 Plant Lamp is a very compact 300-watt lamp that still has it all: it’s an intense light with a great build quality. It’s well suited for a small coverage area.

The P300 lamp is powered by 100 Epistar LED chips that provide a 12-band color spectrum, producing both UV and infrared colors. You can choose between 2 different lighting modes: for the vegetative and the flowering phase.

The light is good quality, but not premium. It’s light is more intense than most budget lights like VIPARSPECTRA.

Compared to other lights, the lighting is less visible to the naked eye, but still intense enough so that I highly recommend to wear special glasses when going into your growing space. NEVER directly look into the light while it’s on, even with glasses!

This LED light is one of the more quiet lights, it’s ventilation system doesn’t produce a lot of noise.

A small downside is the price of the lamp: it’s comparatively expensive while not being a true premium light. With a weight of 6kg, it’s on the heavy side for a 300W lamp as well.

There are different models of LED plant lamps that each have their own characteristics.

Mono-spectral LED Grow Lights only support one phase. They emit either red or blue light. With these models, one differentiates between the spectrum “Grow” (blue light for the growth) and “Bloom” (red light for the bloom production). However, some versions also serve both spectra.

These are marked with the spectrum “Dual” (red and blue light for flowering and growth).

While these LED plant lamps produce a violet-heavy light, there are other models in which white light is emitted. This is the “continuous spectrum”. They cover large parts of the red and blue wavelength ranges as well.

In addition, however, sometimes you have green and yellow light being emitted, giving the impression of white light. So really take a good look at the documented spectrum. For most plants, you want the FULL PAR spectrum.

If it is too warm, photosynthesis will not work properly. As a consequence, the plants only grow stunted.

If it’s too cool, the photosynthetic processes do not start.

The optimum temperature for photosynthesis is around 35 C. If it is too warm, it also has a negative effect on the plants:

At 38 C, the photosynthetic performance of plants from our climates decreases.

For this reason, when buying an LED plant lamp, make sure that the heat generated by the lamp is not too high (you can test this with a thermometer).

Here is a particular advantage of the LED technology: since LED lights do not have a filament, but produce light via semiconductor materials, the heat generation is very low in most LEDs.

Bulbs of powerful LED plant lamps can develop a relatively high heat. However, only a fraction of this is released to the plants and ultimately has no inhibitory effects.

LED plant lamps additionally come up with different cooling systems. First, there is the passive cooling. This works with the help of additional metal fins, which dissipate the excess heat to the environment. This design makes such LED Grow lamps less compact, but works without an annoying operating noise.

On the other hand, there are active cooling systems. These dissipate excess heat through the use of fans. This creates operating noise, which can now be reduced to a minimum through innovative silencing technologies.

When buying an LED plant lamp, you should ensure that the criteria of the right spectrum, cooling and intensity are met. Of course, it is important to pay attention to the needs of your plants. Every plant thrives under a different spectrum and intensity.

A LED Grow Light can only bring ideal results if its spectrum and intensity fits with the respective plants. If these fit, you can be sure your plants will grow and yield in an amazing way!

JuJu OG for Those Who Want to be Energized Yet Relaxed

Vaping and COVID-19: All You Need To Know

10 Simple Ways to Include CBD in Your Daily Routine

Accessories that are related to weed seem to be becoming popular, and for a good reason.  Major states in...
Weed 101

Understanding Everything About Good And Bad Weed.

There are many distinguishing features that let people know about good and bad quality weed. Whenever you buy...
Cannabis

Are you a Cannabis enthusiast? one who has been looking for different strains that can give you the...
CBD

Which Is Better For Pain: CBD or THC?

CBD or THC might seem like two sides of the same coin, but in reality, there are actually...

Accessories that are related to weed seem to be...

Understanding Everything About Good And Bad Weed.

There are many distinguishing features that let people know...

Are you a Cannabis enthusiast? one who has been...

Diabetes is a major disease affecting millions of people...

They say one has to go downhill in order...

Marijuana is known for many things, but one of...